First one is a Campaign Prototype for Eberron available on WotCs' DM's Guild. Second is a Guildmasters’ Guide to Ravnica. 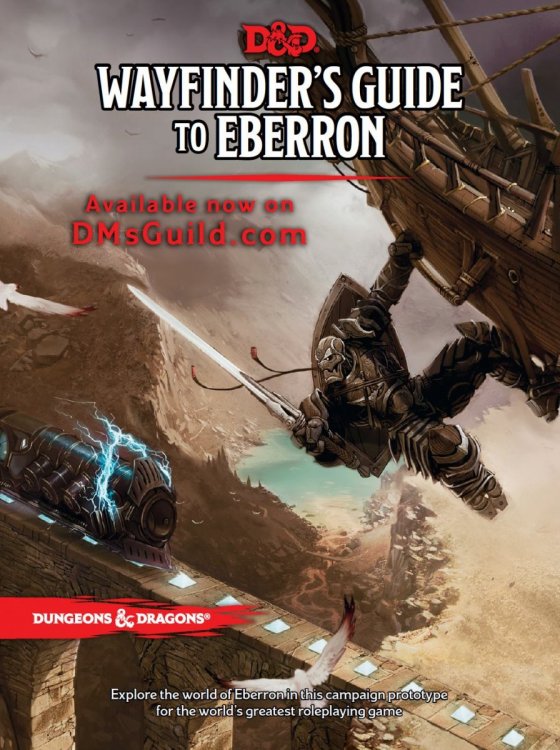 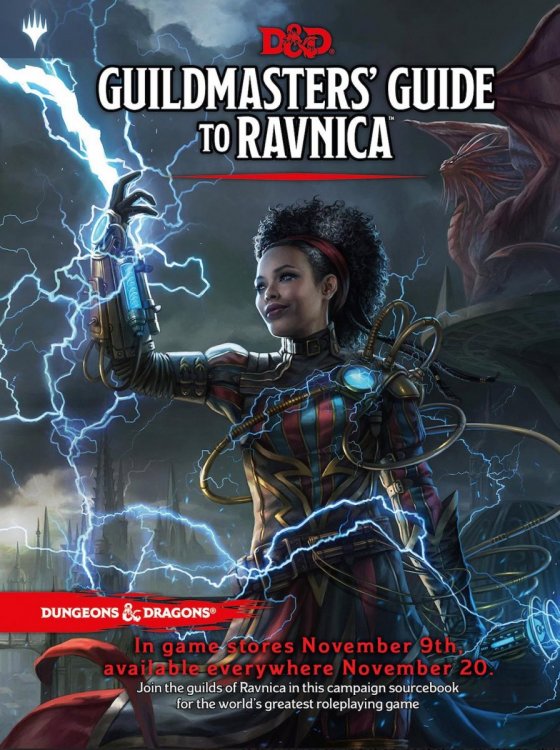 Wayfinder's Guide to Eberron is available now on DMsGuild.com and sold in PDF format for $19,99.

There is no printed version of Eberron Campaign Setting announced at this moment. Placing Wayfinder's Guide on DMs Guild most likely means that Eberron is going to be another world, after Forgotten Realms and Ravenloft, available for DMs Guild users to create content with. We'll confirm that as soon there's official permission, but it looks obvious.

UPDATE: And here it is. Eberron is now officially allowed.

"Under the DMs Guild program, you can publish D&D material that either has no setting or uses the Forgotten Realms, Ravenloft or Eberron settings." ~ DM's Guild

More about the War of Eberron from Keith Baker:

And the player races of Eberron in 5e through the words D&D Beyond's Todd Kenreck & D&D Creative Director Mike Mearls:

"Eberron was born in 2002 when Wizards of the Coast launched a worldwide search for a new campaign setting.

Wayfinder’s Guide to Eberron brings the eponymous campaign setting to fifth edition Dungeons & Dragons, providing an overview of the core themes of the setting and the rules to connect them to current campaigns. It explores the continent of Khorvaire and the great city of Sharn. Herein awaits a fantastical sampling of what this setting has to offer, as well as hooks for compelling adventures of your own design.

Particularly useful is a list of sources for learning more about Eberron.

Want to create and publish your own Eberron PDFs?

The Wayfinder's Guide to Eberron can serve as your jumping off point to create your own monsters, adventure modules, and other tabletop content set within Eberron and put it up for sale on the Dungeon Masters Guild.

Need more information? Check out the Content Guidelines and FAQ for DMsGuild creators! Plus you can find free Art Packs, Templates and more in the Resources for DMsGuild Creators area!"

Remember though that this is only a prototype Eberron Campaign Setting!

Which means the following:

"(...) this book presents my vision of Eberron. This is the world I run at my own table, and the way that I’ve converted its ideas to the fifth edition rules. All of the material here is presented for playtesting and to spark your imagination. The game mechanics are in draft
form, usable in your campaign but not refined by final game design and editing. They aren't officially part of the game and aren't permitted in D&D Adventurers League events. If Wizards of the Coast decides to make this material official, it will be refined based on your feedback and then appear in a D&D book. Beyond that: Eberron is your world as much as it is mine" ~ Keith Baker, Eberron's Creator

So this new PDF ebook is basically something between Unearthed Arcana and retail Campaign Setting - an official release, but targeted for DM's Guild which is a specific place, serving its purpose. That doesn't mean it's not a valuable new material - it's just not allowed in Adventurer's League yet, and it's not a fully finished Campaign Setting. Such would be priced higher and sold as hardcover. Which may happen in future, like with Ravnica.

UPDATE: According to D&D's Mike Mearls, this prototype ebook will be updated with new data and revisions in the process of production of the final Eberron Campaign Setting. So if you buy the PDF now, you'll have the latest content added later for free. Still, those 2 books (pdf and hardcover setting) should have some original content, as Mike Mearls said on Twitter: "we want the owners of both to be happy".

"Updates to PDFs are free once you buy them via the DMs Guild, so if you buy today you'll get the updated ones for free." ~ Mike Mearls

Sources (check details in the replies):

In our previous article we've mentioned some information and sources about Ravnica, check it out.

"RENTON, WA. – July 23, 2018: Wizards of the Coast is psyched to announce the first collaboration on a major product between Dungeons & Dragons and Magic: The Gathering with Guildmasters’ Guide to Ravnica releasing everywhere on November 20. The book will contain everything fans need to play D&D in the world-spanning city of Ravnica, the fan-favorite Magic setting populated by ten rival guilds, each with its own ethos and agenda. Wizards is also announcing D&D fans can now return to a magic-heavy noir setting with Wayfinder’s Guide to Eberron, a new document written by Keith Baker available online now. The exploration of these settings is a testament to how fan excitement can shape where D&D travels to next.

“Fans of Dungeons & Dragons and Magic: The Gathering have been asking for years about when these two amazing brands would play together,” said Nathan Stewart, director of D&D. “With the huge surge in popularity of D&D and Magic’s commitment to bring the lore and storytelling to life, the timing seemed perfect. Ravnica is full of adventure possibilities and I can’t wait for fans to jump in to embody a member of one the iconic guilds. I will personally be making a new character for Rakdos.”

“This fall, Magic returns to the beloved plane of Ravnica with the release of the Guilds of Ravnica set for the trading card game and the D&D book Guildmasters’ Guide to Ravnica which will include classes, races, monsters and setting information on the ten opposing guilds,” said Elaine Chase, Vice President, Global Brand Strategy & Marketing for Magic: The Gathering. “It’s super cool for fans of D&D and Magic to be playing together in the same multiverse.”

“We’re excited for fans to dive deeper into the robust world of Ravnica as they adventure as a member of their favorite guild,” said Aaron Forsythe, Senior Design Director for Magic: The Gathering. “Picking up Guildmasters’ Guide to Ravnica is a great way for D&D and Magic fans alike to tell a part of Ravnica’s story with their friends around the table.”

More enfranchised D&D fans may know that Keith Baker created the Eberron setting as part of the Fantasy Setting Search conducted in 2002, and the D&D team has been working with him to update the setting. The first step is the Wayfinder’s Guide to Eberron, a digital release in the Dungeon Masters Guild online marketplace, which will serve to collect feedback on adjusted races, dragon marks, new backgrounds and more. Fans can also use this document as a jumping off point to create their own monsters, adventure modules, and other tabletop content set within Eberron and put it up for sale on the Dungeon Masters Guild (dmsguild.com).

“It's been sixteen years since I planted the first seeds that would become Eberron, and watching it grow has been an amazing journey,” Keith Baker, creator of Eberron. “So many good people have been involved in creating the world we see today, and it's been wonderful to see it come to life. I can't wait to see what people do with the world!”

Since the inception of Dungeons & Dragons fifth edition with the public playtest involving more than 175,000 fans and continuing with the current record-breaking success of the brand, the focus has been on listening to fan feedback. D&D is excited to travel to Ravnica and Eberron in 2018 and other planes beyond in 2019!"